If not me, Oritse Femi Would still be in The Ghettos of Ajegunle – Ex-manager Reveals - I.T.U.K musik

Home Unlabelled If not me, Oritse Femi Would still be in The Ghettos of Ajegunle – Ex-manager Reveals

If not me, Oritse Femi Would still be in The Ghettos of Ajegunle – Ex-manager Reveals 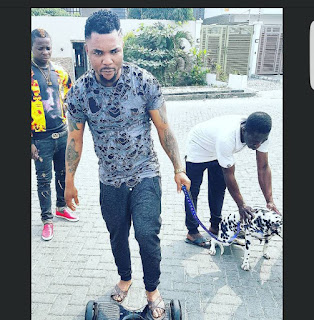 Oritsefemi, has reacted to allegations levelled against him by Danko, ex-manager to Nigerian music act, singer, saying ‘I made him who he is today.’
It would be recalled that the ‘Double Wahala’ crooner had in time past, alleged that his ex-manager took his Range Rover and stole his N58m for endorsement he got from a brand.
Debunking the claims, Danko, in a chat with The Sun, said, “He said I took his Range Rover and stole his N58m for endorsement he got from a brand. I was surprised because I don’t know where he got the endorsement from. It is unfortunate that he came up with those allegations against me just to promote his music and ridicule me.
“The Range Rover he is talking about, he crashed by himself when he was coming from an event I was not aware of on December 6, 2014. He is going around parading himself as the owner of MSN Gang, my company, which I registered myself. I have everything documented with my lawyers but I will address the press very soon extensively and will expose his lies.”
“Without me, Oritsefemi would still be in the ghettos of Ajegunle struggling.
“Oritsefemi is an artiste that I took from nowhere and made somebody. I took him from Ajegunle and brought him to Ikeja. I took him to the Island and I took him to Lekki as well. I took him to D’banj, I took him to Davido and some A-list artistes he never believed he could work with,” Danko added.
Danko, speaking further, revealed that the reason he ever agreed to work with the musical Taliban initially was because of the pressure he was piling on him.
“We started working in 2013. I used to give him shows and events. At a point he was always calling me for money so I said ‘let me do something for him.’ So I picked him up from Ajegunle.”
He added that until he took Oritsefemi to Abuja to sign a record deal with his business partner, the relationship between them was cool.
“It is unfortunate that after I took him to Abuja to sign a record deal with my business partner, Mr. Allen of Avatar, he came up with this strange behaviour trying to disorganise the plans I had for him,” Danko said.
“I guess he was overwhelmed by the prospects and believed that he had finally arrived because he never believed he could make it to the level I took him to.”

“Contrary to Oritsefemi’s claims, Double Wahala is a hit today due to my efforts.
“I did the promotion of Double Wahala from scratch. I sponsored the promotion because he had nothing. For three months I promoted that song with my own money,” the ex-manager stated.
Source: www.NigeriaMotion.com