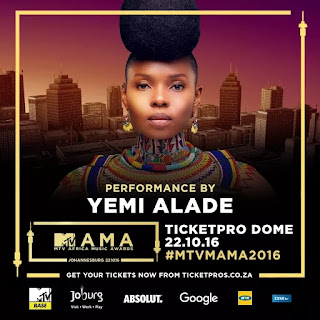 Just weeks away from the annual MTV Africa Music Awards , it has been announced that
Yemi Alade will headline this Joburg’s first ever edition of the #MTVMAMA2016 alongside Nasty C and Babes Wodumo.
The Effyzzie Musi c diva who won the award for “Best Female ” last year and delivered an electrifying performance; would return to the stage and bring the heat to the #MTVMAMA2016 with a performance which promises to leave tongues wagging.
The MTV Africa Music Awards will take place at
The Ticketpro Dome on Saturday, 22 October 2016. The MTV Africa Music Awards 2016 will broadcast live on MTV Base (322) and MTV (130) on
Saturday 22 October at 21:00 CAT.