Let’s Gist: Kizz Daniel Is Overhyped, Mr. Eazi Is Far Better Than Him, DO YOU AGREE? - I.T.U.K musik

Home Gist Let’s Gist: Kizz Daniel Is Overhyped, Mr. Eazi Is Far Better Than Him, DO YOU AGREE?

Let’s Gist: Kizz Daniel Is Overhyped, Mr. Eazi Is Far Better Than Him, DO YOU AGREE? 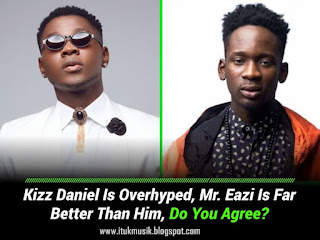 Hope you are having a great day out there? May We witness 2019 together.
I’m here again with my argument and it’s a very interesting one this time and will like to hear from you guys.
The entertainment industry is very competitive the year as we B-list artists are ready to take over the crown from the A-list artists.
But currently, the main argument is based on two of the most talented artists we have in the industry.  Kizz Daniel And Mr. Eazi
My friend was listening to Mr. Eazi‘s latest project themed “Lagos To London“ which has over 20million streams within 24hours
Wow! and suggested is the best project he has ever heard this year, even went on arguing that FlyBoi Inc Boss Kizz Daniel who also released his 2nd project titled “No Bad Song” is overhyped, Mr.Eazi is far better than him.
However, the Leg Over Crooner  Mr. Eazi as been consistent in dishing out hit singles with a good lyrical content that can stand a test of time this year like Property, Surrender etc. He has also signed some mouth-watering deals in London at the early part of the year. It unarguably Mr. Eazi already has a fan base in London.
Meanwhile, Kizz Daniel has never stopped giving us hit singles even with court issues he has with his formal record label. He also signed some artist under his record label and also released his first album since he left G-worldwide but with the huge success, the artist is still yet to sign an endorsement deal or break any record in the industry. i.e has not done anything special form what previous artist has been doing.
Let me leave it to hear from you guys to make justice to this.

Do You Agree? Mr. Eazi Is Better Than Kizz Daniel?

Email ThisBlogThis!Share to TwitterShare to FacebookShare to Pinterest
Tags: Gist