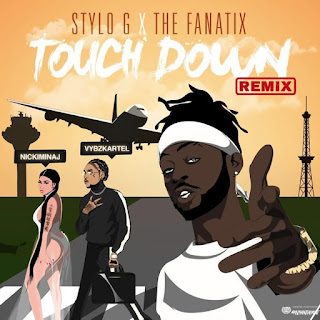 In October, British rapper Stylo G dropped the Fanatix-produced “Touch Down,” immediately prompting a fervent response from fans. Naturally, a remix was the next logical conclusion, so Nicki Minaj and Vybz Kartel came through to acquiesce.

“Young Money,” says Nicki, in the track’s opening notes. “We in the UK!” From that point on, the hypnotic synth loop takes over, providing Stylo G,  Nicki and Vybz Kartel with an infectious instrumental to destroy. Stylo slides through with the opening verse, establishing the track’s primary flow with a reflection on his ability to shut sh*t down. Nicki is up next, showcasing a respectable versatility over damn near any beat. “Platinum plaques in my office, turned down million dollar offers,” spits the Queen. “I don’t fuck with the middleman, low ranks, I’ma only meet wit the bosses.”
Vybz holds it down with the followup, turning in a brief but memorable contribution. “Just touched down like Nasa, Nicki pun-pun fatter,” raps Vybz Kartel, providing his collaborator with a surprising co-sign. “While you’re there at your job, your girl givin’ me a blowjob.” Classic “your girl” banter, though said with conviction. Peep the collaboration now, and sound off below.
DOWNLOAD MP3: Stylo G x The Fanatix – Touch Down (Remix) ft. Nicki Minaj & Vybz Kartel