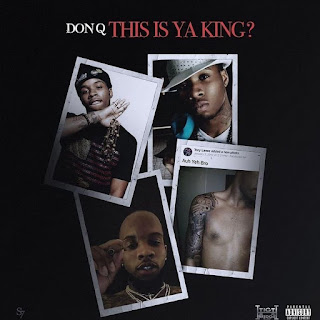 Don Q isn’t lowering the guards yet as he springs again with another diss against Tory Lanez in new release, “This Is Ya King?”

On Monday night (January 29), Don took to social media to reveal that Tory Lanez was in the studio attempting to discover dirt. Don posted screenshots on his Instagram story that seems to prove Lanez’s team was busy trying to track down the name of Don Q’s baby’s momma.
Obviously, this didn’t sit well with Don, who finished his story with a warning that he was heading back into the studio. Now, the fruit of his labour has arrived.
The beef originally started after Tory performed a freestyle on the Funk Flex show, which seemingly copies some lines from Don Q’s freestyle performance. The rap beef also started not long after Tory claimed that he is the best rapper alive in several tweets and on Instagram Live.

Spot him on his rap tour in Toronto
Then who gon’ back up the guard like VanVleet?
You really let the fame go to your head (For real)
Hope you know what you said (What?)
I’m ’bout to throw this nigga over the ledge
Bruce Willis in Sixth Sense, he don’t know that he dead
Could let him find out for himself, or I could show him instead (I could show him)