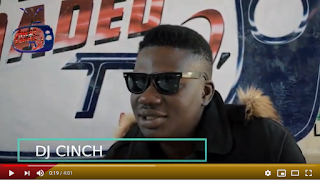 Fumen John Naye, popularly know as Dj Cinch hails from Kaduna State, Jaba (Ham) by tribe, Cinch is a graduate of the Department of English and Drama Kaduna State University (Kasu), he's a recording and performing artist. He recently won artist of Year KEA awards 2018, recorded his first song in 2003 in Zaria where he was born and brought up. Popularly known for his hit Arewa Wo Olamide Cover which dropped in october 2017 and brought him to limelight, ever since then he has performed in several Shows in and outside Kaduna state. In 2018 he performed in the biggest music festival in Nigeria "Afropolitan Vibes" at Victoria Island Lagos, alongside The Bantu Band, Omawumi, Bright Chimeze, and Johnny Drille. Also had his first interview on Mtv Base last year 2018, Also got married to his beautiful wife in December 2018.
DOWNLOAD HERE
(15.76MB)
STREAM INTERVIEW BELOW
Tags # video
Share This