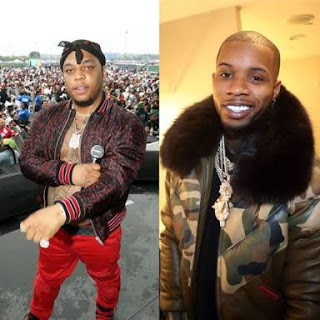 Tory Lanez fired back at Don Q. After Don dropped “I’m Not Joyner” on Saturday (January 26) and declared his newfound rival was scared to respond on Monday afternoon (January 28), Tory has released a new diss track titled “Don Queen.”

“I did this shit for no reason, I’m letting rookies battle/How did I get into this battle with A Boogie’s shadow?/Big Apple, New York City, more to pity/How can I beef with a dude only popping in four cities?” Tory raps over Drake’s “Duppy Freestyle” instrumental.
Throughout the song, the outspoken rapper/singer mocks Don for being in the shadow of his longtime collaborator and labelmate A Boogie Wit Da Hoodie.
Tory also gets personal and claims he received the information from one of Don’s baby mama. Later on, he brags about how his diss will bring more attention to Don than ever before.
“This record right here’s about to give you more shine than A Boogie ever gave you in ya whole career,” he quips.
Tags # Music
Share This