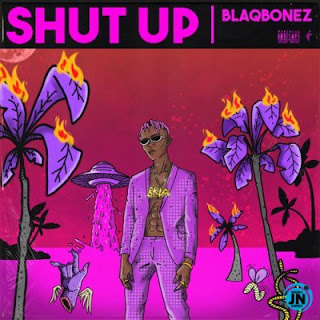 With the recent stir caused by Chocolate City rapper, Blaqbonez across social media when he took to the street to loud and tell everybody that he is the best rapper in Africa and won’t let the genre die, the rapper has now officially released his first single after the incident.

Showing off his rap prowess and great lyrical word play, Blaqbonez has churned out an impressive song called “Shut Up.” Just as the name, you already know it’s gonna be a hard track.
They are a lot more about this song that we would really love to talk about, but due to the fact that we know how urgent a listen is important at this point,B we’ll let you take a listen and do the talking yourself.
You can download “Shut Up” below and check out the website’s homepage for other similar tracks, but don’t forget to share your thoughts because it’s very important to us.
👇👇
DOWNLOAD HERE
Tags # Music
Share This