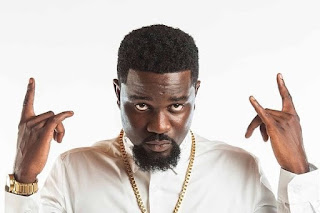 It seems Yemi Alade still has some grudges to solve with Ghanaian rapper Sarkodie after she revealed the Ghanaian rapper once ignored her when she tried reaching out to shoot a video for “Ego”, off her second album “Mama Africa”.
In an interview in 2017, the Alade singer said:
“I can count three different countries and three different venues where my team and I had an agreement with the artiste [Sarkodie] in particular and he didn’t come through,”
“I’ve really tried my best to really not go into details but the long and short on why I don’t want to dwell on this is that is super unfair, unprofessional and unkind for international acts or even artistes to have a dealing with anybody and after agreeing to certain things, you don’t come through at all.”
The singer followed her disappointment up by unfollowing the BET Award winner on Twitter.
From Sarkodie’s post, he was not aware he had been unfollowed by the Nigerian even though he made a tweet hyping Yemi Alade’s new music video featuring legend Angelique Kidjo.
Though the Nigerian acknowledge Sarkodie’s act, she still failed to follow him. This got Sarkodie to ask his army on twitter to plead to the songstress on his behalf.
He tweeted ”
“Ou just realized queen unfollowed me… SarkNation tell my sis to follow me back n I’m sorry . No need for no explanations it’s 2020 Link up . always proud of you “ 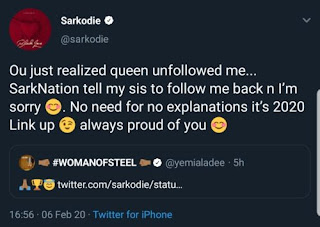 Watch the music video for Shekere below!