[NEWS] Burna Boy: I Used The Stairs To Get To Where I am Today - I.T.U.K musik

Home News [NEWS] Burna Boy: I Used The Stairs To Get To Where I am Today

[NEWS] Burna Boy: I Used The Stairs To Get To Where I am Today 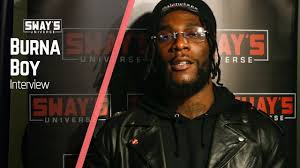 The “Ye” singer recently got featured on international men’s magazine “GQ” and photos from the magazine have caused a stir on the internet but that didn’t end there.
According to him, he has had to go through the never ending hard steps to get to where he is while other artistes have taken the shorter route.
Burna boy added that such a method was inappropriate for him so he had to take the longer route and that has made him more experienced.
Speaking on his albums doing successfully and amassing huge numbers, Burna emphasized as he had always done in the past that he has no regard for numbers.
Burna said he feels this way about numbers because they have no feelings and soul and that the numbers are actually the people that felt his music and the message he was trying to pass across.
He wrote:

“Unlike a lot of other people, I’ve had to go through never-ending steps to get here, whereas other people have taken the elevator up,” he shares.
“I’ve always been too heavy for that kind of elevator, so I had to take the stairs. Now I know every floor and everything on every floor.”
“I don’t really have a high regard for numbers, because numbers have no feelings, they have no soul, whereas I do, “My ‘numbers’ is the people who have actually felt the feeling that the music is supposed to carry across and in the process received the message.”